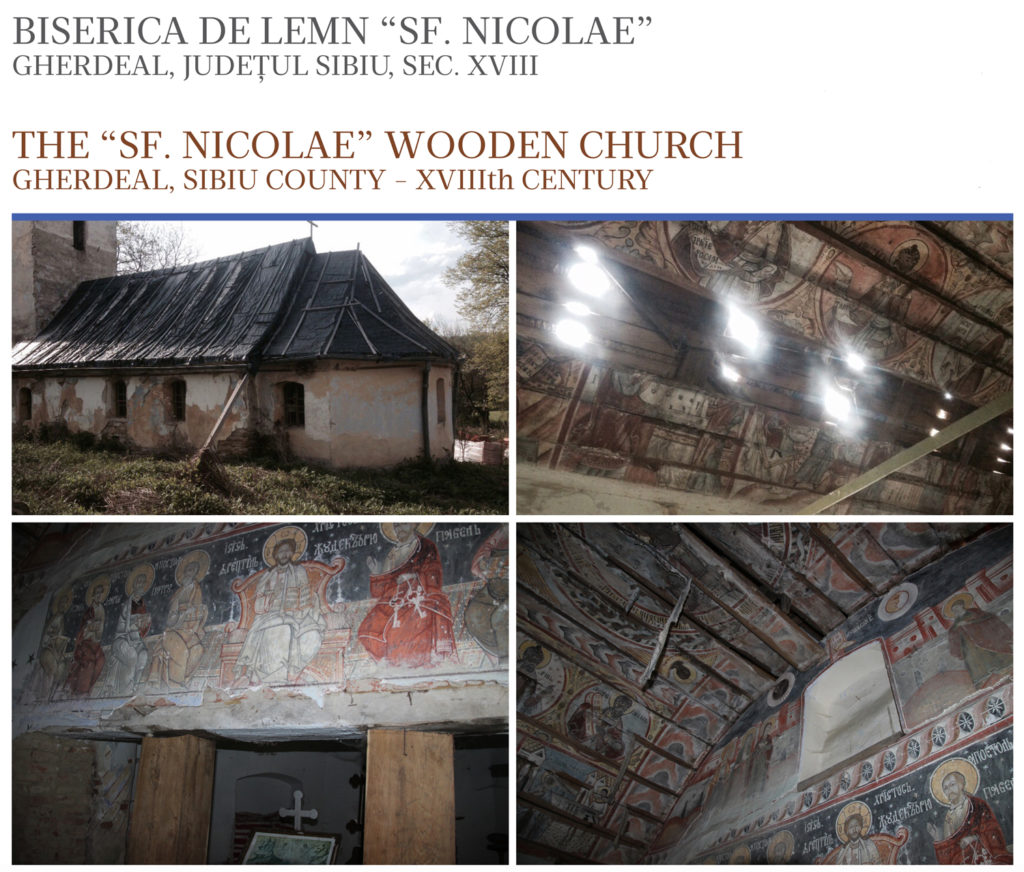 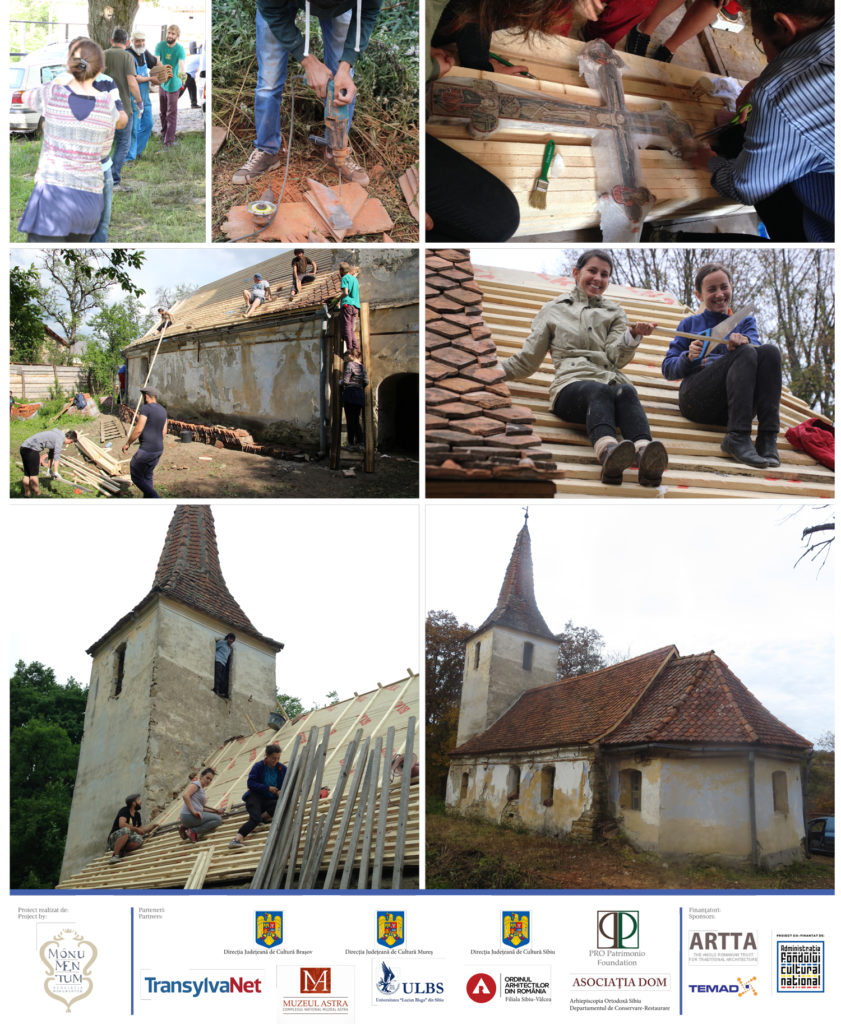 GENERAL PRESENTATION
Gherdeal is located at 10 km from the Olteț train station (in the Saxon Language Besembav) and it is placed between forest-covered hills. The history of
this village is in a tight connection with that of the Carta Oltului.
The Orthodox church from Gherdeal is an edifice in a rectangular plane, with its structure in a single nave and a ritual compartmentalization of the interior
space, into naos and pronaos. The Eastern apse, recessed, is of an irregular polygonal shape, with 5 sides (the lateral ones disposed perpendicularly
onto the Eastern side of the nave). Highlighting the pentagonal shape, both on the exterior as well as on the interior of the apse, marks the influence of
the architecture of the Gothic churches, a fact which indicates the possibility that the builders might have originated from the Saxon environment. An
expression of the same occidental influence, the bell tower, a square section, is attached to the Western extremity of the nave.
The general dimensions of the building are of 15.91 m in length and 5.90 m in width, the height of the edifice reaching 6.17 m at the ridge of the roof, a
level beyond which the tower is risen with another 10.98 m.
Within the thickness of the Northern and Southern walls of the nave, built from brick and rocks from quarries with irregular surfaces, rectangular
windows are opened, closed in a flat arch. In a symmetrical layout, the following are found: two pairs in the naos and a third one in the narthex. The
space of the nave is delimited in the East, from the compartment of the sanctuary, through the iconostasis, conceived at Gherdeal as a full masonry
wall, with three openings in the lower part and a niche closed in a flat arch, in axis, over the imperial doors. Two mullions support the iconostasis in
its intermediary area (their structure gave in, so they were replaced, provisionally, with pillars made of oak wood) and two engaged columns, at the
extremities (visible only from the interior of the apse). The openings of the windows, similar in form and dimension to the ones from the nave, are
distributed in the areas of the apse, being located one on the axis and the other two on the external sides of the polygon. The North-Eastern and South-
Eastern walls, disposed obliquely towards the axis of the monument and which are not provided with windows, instead with niches closed in a flat
arch, corresponding to the Prothesis and Diaconicon. A narrow wall table, supported on the Northern side of the apse serves the same liturgical ritual,
that of the Prothesis.
Concerning the roofing system, the interior spaces of the Orthodox Church from Gherdeal show a particularity which is met very rarely in the
Transylvanian cult architecture. This consists in the fact that above the masonry walls, which form vertical support elements for the nave, the craftsmen
superimposed a cradle vault, with an axial layout, which is not made of masonry, but built entirely of wood. The laths, oriented to the direction of the
axis, were mounted on four transversal arches, which form the exterior frame or the vault.
In the sanctuary, the apsidal vault is built, yet it highlights an equally unusual system. This is composed of a spherical cap, the section of which tends
to get a hexagonal shape, towards the level where it overlaps the sides of the polygon described in the plane, by the vertical walls of the apse. The
connection is made through six unequal arches and six spherical triangles. The bell tower, on the Eastern facade of which the existence of an architectural
decoration element is noted, in the shape of a circular eye, is supported directly at ground level, having arch openings, in the North and South. Located
right under the tower, the interior access door is opened in the axis, on the Western side of the nave. At the level of the arches, right above the entrance,
rises a crossed contorted vault.
The vault of the nave is comprised within the general volume of a high roof, in two partial sides, with sharp tile covers. Above the apse, the roof is
flattened and a bit lower.
The cover of the Western tower starts out as a pyramid body, short and with a square base, to which the high and sharp pyramidal crest, in an octagonal
section is articulated.

SAFETY INTERVENTION PROPOSAL
The urgent rebuilding of the cover over the altar and the naos and closing with a light wooden structure of the tympanum between the altar and the naos
is proposed, the meteoric water already affecting irreversibly the painting and the structure represented by the wall from the level of the iconostasis.

ACCOMPLISHED INTERVENTIONS
It was performed the replacement of the damaged hydro-insulating membrane from the level of the altar and the naos with a definitive one from
manual ceramic tiles. The ceramic tile in a triangular shape was purchased from the Țara Bârsei Area, the area from where the original cover originated.
Special thanks for the support and involvement to Lect. Dr. Ioan Ovidiu Abrudan, Lect. univ. Dr. Cristina Dăneasă and Maria Modi.