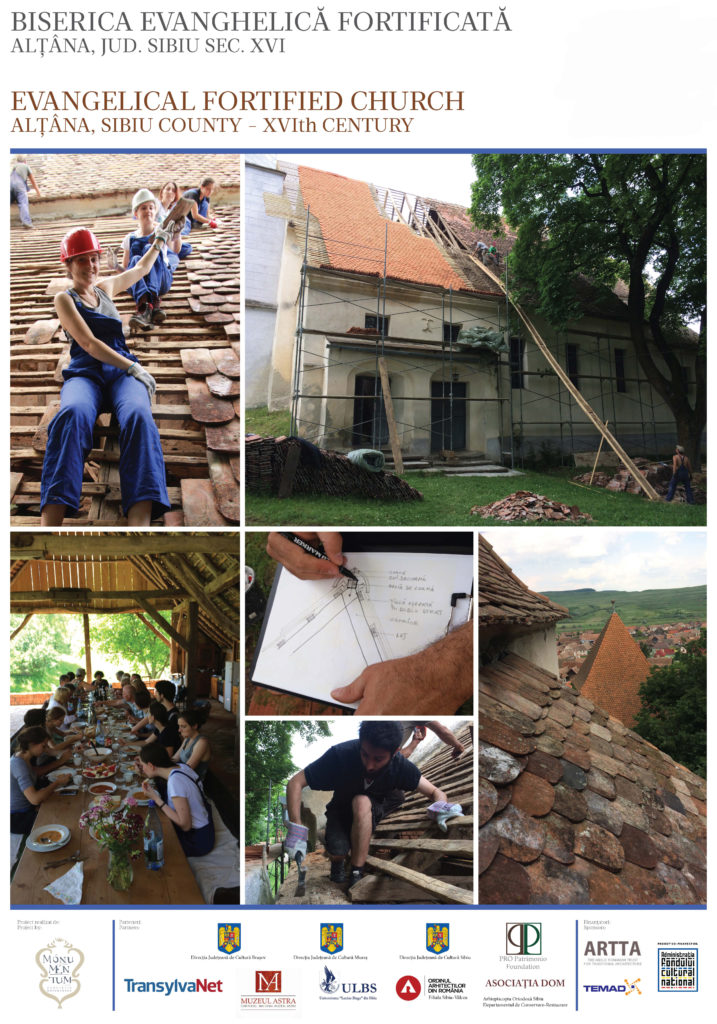 GENERAL PRESENTATION
The ensemble of the fortified church includes a basilica and a surrounding precinct with four towers and a large zwinger on the (south-)eastern side.
The basilica has both Romanesque (the naves with square-section pillars and the choir) and Gothic elements (the polygonal sanctuary and the vaults),
but also a Neo-gothic tower to the west. These major elements of the ensemble were built and rebuilt along the period between the 13th and the 19th c.

THE STATE BEFORE THE INTERVENTION
The roof covering of the basilica has been degraded for a long time. Minimal consolidation works were made some decades ago, but in time they began
to fail. Furthermore, because of the climate the degradations rapidly advanced, thus the water infiltrations threatened the roof structure.

ACCOMPLISHED INTERVENTIONS
After the documentation of the roof elements covering the sacristy was made, the damaged covering was carefully dismantled and the degraded
structural elements of the framing were completed/replaced (rafters, purlins, rafter ties), as well as the degraded (laths). Afterwards, the previously
removed part of the covering was completed with manually made tiles. The works were financed by the Saxon organization from Alțâna (HOG Alzen),
by Siebenbürgische Stiftung and other donors, however it would not have been possible without the support of the generous and energetic Hans Tekeser (Alzner Automotive) and of Rosemarie Müller, the trustee of the ensemble. The works were executed by the team conducted by master Ernst Linzing from Mălâncrav. Monumentum Association, expert arch. Ioan Bucur and arch. Hermann Balthes offered pro bono the documentation necessary for the emergency intervention. Our thanks to all of the ones mentioned above, but also to TEMAD Romania – the traditional sponsor of the Ambulance for the monuments, who supported the expenses for the necessary tools and equipment of the volunteers.