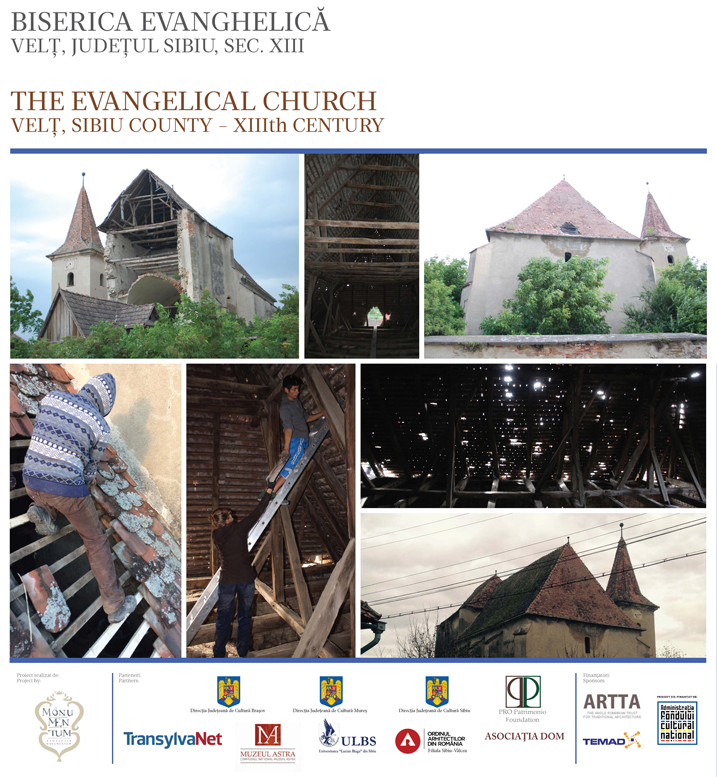 HISTORY
The hall church was built around the year 1400, its style belonging from a stylistic point of view to the late Gothic. Closed towards its Eastern side,
its generous choir loft is separated through an unusually high triumphal arch, of a hall, it being illuminated by three windows that were once closed
by an ogival arch. On the Northern walls there are no windows, while the Southern wall has three narrow windows in an ogival arch. In older days,
westwards, the façade opened an impressive portal of about two meters in height and 1.5 m in width, it being subsequently built in. One can enter the
church through a single access door located on the Southern side, access that forms another ogival arch which is evidently profiling through a mortar
plastering. The defensive installations had seven ramparts each, two located on the walls of the choir loft and one on the Eastern sides of the apse. The
ramparts are rectangular, their destination being addressed to the fire guns.
The choir loft and the hall are provided with a hemicylindrical vault with penetrations. In the West, there is a balcony for the organ, added later. The
organ is from 1812 and it was repaired by master Karl Einschenk in 1914. From the Gothic period, the tabernacle and 2 bells from the XVth and XVIth
century remain. In the Southern part, the gate tower and the bell tower are located. The tower from the Southern side dates back to 1601, serving as a
bell tower, with a height of approximately 32 m. In the South-East, there is a building which, in 1854, was built as a city hall; it is possible that there was a chapel on the respective spot in the Middle Ages.
In the year 1880, restorations were carried out, consolidating the current vault; the choir loft was provided with a double circle and, on the inside, with 8 transversal bars, the lower part of the church was rebuilt from stone and brick. The lateral walls and the vault are built only from brick. According to the census from the year 1910, the inhabitants of the village, a number of 987 persons, decided to carry out a general restoration in the year 1912.
The baroque altar was destroyed when the choir lofts eastern wall collapsed in 2002. An oval space surrounds the church. Since there is no longer an
evangelic community in the locality, the collapsed choir loft has not been rebuilt.

CURRENT STATUS
After the collapse of the choir loft and the altar in the `90s, the church was effectively left prey to degradations and devastation by the local population. The oak structure of the roof is affected in a few points and dislodged, but it can still be salvaged. Dislodging of the wooden tie beams were produced due to an inadequate structure system and dislodging of the majority of the cantilevers from the level of the wooden tie beams appeared. Some of the wall plate and beams are rotten. A part of the laths is degraded. The tiles are degraded or missing here and there, allowing the infiltration of the meteoric water.
SAFEGUARDING PROPOSAL FOR THE MONUMENT
We propose the completion of the degraded structural elements, including the laths, and completing the missing or degraded elements of the cover.
At the level of the collapsed choir loft and altar, we propose the provisional closing of the resulted gap. Taking anti-theft measures is necessary, by
mounting a provisional metallic gate at the entrance from under the tower.

UNDERTAKEN INTERVENTIONS
All the degraded elements of the cover were replaced, as well as the degraded laths from the main nave. On the Southern part, the tiles were checked
one by one, and the rest were locally replaced.